Diane Aronson worked with wonderful, dedicated volunteers and served as an advisor, and then later as president of Road Back Foundation (RBF), from the early 1990s until 2008. During this time, the foundation flourished and grew and she shares its many accomplishments, as well as her momentary encounter with Dr. Thomas McPherson Brown and her impressions of author, Henry Scammell. Offering valuable insight about successfully approaching her physicians to treat her rheumatoid arthritis (RA) with antibiotic protocols (AP), Diane has also provided an AP journey update.

An Interview With Diane Aronson, Past Road Back Foundation President

Diane, you were one of the very fortunate people able to meet the late Dr. Thomas McPherson-Brown in person for an appointment. Very sadly, it was so close to the time of his passing and this is described in the book, but can you recall much about your brief encounter with him? 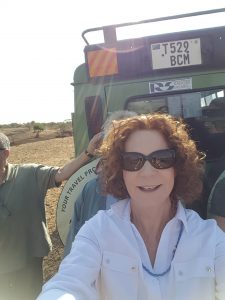 Diane Aronson, Past President of Road Back Foundation

Diane:  I really don’t have any other strong memories about my office visit other than what was included in Henry Scammell’s book. Dr. Brown was very ill and I saw him for about 5 minutes, after which I was given an IV by a staff nurse. What was needed for me, through this visit, was a confirmation of the treatment that I had started in Iowa with Dr. Sinnott. I had done my research and was confident but was hopeful to confirm this treatment course as I believed I had no other.

Readers of this interview may not realize that you were a volunteer and served Road Back Foundation on the board of directors, as President. During your tenure as President, can you share anything about the foundation’s evolution?

Diane:  I brought to the Road Back Foundation my work with other non-profits, serving on their Boards of Directors, many as President and as an Executive Director for two national organizations. Communication (the Intercessor newsletter – begun by previous volunteers – and a new Road Back Foundation brochure) and facts (information fact sheets and our commissioned Harris Poll) were key. The 1994 NIH clinical trial that found the treatment to be safe and effective was often quoted but we needed more. We had to work to find ways to portray this important patient treatment-option in ways that would not be dismissed. Interaction with members was critical early on so we held annual award events which helped raise funds for our postage and printing. The Harris Poll was an expensive endeavor but another important education tool. No volunteer was ever paid for the work accomplished. During the 90s, the internet was just blossoming. We realized the importance of an active website so volunteers set about its development with content and support mechanisms. As outreach, we attended the American College of Rheumatology annual meetings for many years, and during some years, sponsored and staffed an exhibition booth to provide information about the Road Back Foundation and antibiotic treatment for rheumatic diseases. You can guess we weren’t fondly received by all!  Our wonderful volunteers spent years speaking by phone to countless people from the U.S. and around the world who wanted information. Phone calls were our blessing and also our curse until the breakout of the internet and Road Back’s community bulletin board.

I am so very grateful for the on-going work of Road Back volunteers, its updated changes and the abilities to sustain the education and outreach efforts of the Foundation since I left. While there is less direct, in-person communication via the internet (a sign of our times), the support provided by the Website is immeasurable.

What were your impressions of author, Henry Scammell?

Diane:  Henry was committed to sharing the truth about people’s experiences and he believed patients’ experiences, on antibiotic treatment for their rheumatic diseases, were stories to be told! He was a dedicated board member of the Road Back Foundation who shared his home for Board meetings and countless hours of time speaking with anyone who called him to ask about his writings and to make connections with individuals in his books. He was a courageous, generous, compassionate man who helped so many through his kindness and the many patient-chronicles in his books.

Do you have any words of wisdom to share with other rheumatic patients who may be wondering how to approach their doctor about AP and if this treatment will work for them?

Diane:  I try not to argue any one theory about my disease-cause but suggest that doxycycline has been prescribed by physicians for years for long-term patient use for acne and bronchial conditions. I bring up that RA causes inflammation and that doxycycline helps manage inflammation. Most doctors agree to this so that if you focus on your desire to reduce inflammation, many are willing to support this. Also, bring up the NIH multi-center clinical trial as proof of using a tetracycline drug as a disease-modifying anti-rheumatic drug (DMARD) for RA. We combat the medical professionals’ years of training which may be counter to our wishes to try or stay on the treatment. For me, the proof was in the pudding as I improved each year with my better immune-response to infections, bone structure, pain level, overall health and quality of life.