The following lecture is transcribed from an audio tape of Dr. Thomas McPherson Brown speaking on the nature of systemic lupus erythematosus (SLE), its infectious origins, and includes a patient case history, describing the benefits of antibiotic therapy for this rheumatic disease.

Road Back Foundation is a volunteer-driven organization dedicated to preserving the extensive research legacy of Dr. Thomas McPherson Brown and his prestigious career as a graduate of the Johns Hopkins University Medical Center, a researcher at the Rockefeller Institute of New York, a co-founder of the American Rheumatism Association (later American College of Rheumatology), a trustee of the Arthritis Foundation, former Dean of Medicine at George Washington University Medical School, and Director of the Arthritis Institute of the National Hospital.

Lupus (and Targeting the Infectious Cause) 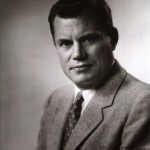 The classical features of the condition are:

I would like to talk to you today about a condition known as systemic lupus erythematosus (SLE). This condition has always been classified as a chronic disease of unknown etiology, and a type of illness that can affect many organ systems, either individually or in combination. The disease can be described, but not really defined.

The particular type of lesion that’s involved in lupus is of the collagen or the connective tissue of the body, the substance that seems to hold all the cells together. Collagen is a fiber, it’s almost like a plastic material, and in lupus it’s severely damaged, at least during the exacerbations or acute flares of the disease. During remissions the collagen can actually regenerate and reform.

Bruising is very common in lupus as it is in rheumatoid arthritis and the reason for this is that the capillary vessels which contain single cells joined together by collagen strands are permeable to blood and fluid very easily because the collagen, being weak, allows the fluid to escape between the cells often swelling of the feet and the hands, not due to kidney disease and not due to heart trouble as noted in these conditions, simply because of the escape of fluid by the cells and around the cells where the collagen fibers are weakened.

The close relationship between rheumatoid arthritis and lupus erythematosus was really clearly demonstrated soon after cortisone was discovered to be effective in these conditions. Cortisone, in the long run, weakens collagen unfortunately, so therefore cortisone as a basic treatment all by itself cannot possibly answer the problem of lupus or rheumatoid arthritis.

Autoimmunity and The Infectious Origin of Lupus

You often hear the term autoimmune reaction which is the basic defect or causative factor in lupus erythematosus. The term autoimmune simply means that patients develop antibodies to their own cells or cellular constituents into proteins of the body. It has been our belief for a long time that a bacterial or viral precursor may set this reaction in motion. Antibodies to viral RNA have been detected in lupus tissues, and particles of paramixo viruses have been found in biopsy material as well. We would think that the mycoplasma or L forms of bacteria could easily be involved in the patient that we have to talk about here today. (Patient name deleted) is being treated on the basis that there is a likelihood of a mycoplasma precursor to this autoimmune reaction, and I think her response to treatment supports this very much.

Many of the aspects of the pathogenesis of SLE or systemic lupus erythematosus appear to be the result of a deposition of antigen-antibody complexes in the tissues. When antigen and antibody – antigen derived from virus particles and antibody from the host reaction – when these two things unite they manufacture really or develop a sort of unnatural protein which is very slowly metabolized. This sits in the tissue and serves as a foreign body and may be the substance which creates this kind of autoimmune type reaction. A great many studies have been done in this direction. For example, patients with SLE that have anti-DNA antibodies have a fall in tissue complement, and this seems to lead to the nephritis that often prevails in this condition.

You’ve all heard of the LE test which we do all the time in this condition and which (name deleted) has as a positive test. This was first described in 1948 by Hargraves. It’s present in many patients with lupus, but it may not be considered that specific. Sometimes lupus patients have a negative test and at times patients with rheumatoid or patients with other connective tissue disorders have a positive test so therefore it isn’t entirely specific. There’s another even perhaps more specific test called the ANF test or the antinuclear factor which is quite useful.

Most patients as stated, complain of fatigue and arthralgias, rashes that come and go, some rather non-specific, and fever. Pleurisy, pericarditis, edema, dyspnea, and cough are often noted and Raynaud’s phenomenon is seen not infrequently. Bleeding, nose bleeds and other forms of purpura are a feature due to the nature of the illness as we have already described it.

The joints that are affected are commonly the hands, the wrists, the knees ankles and elbows and (name deleted) has had fingers that become painful on occasion and even somewhat swollen. There are patients with lupus who develop the classical features of rheumatoid arthritis, but in general the joint changes are not fixed or permanent, they come and go and they are not as severe as in the classical rheumatoid arthritic.

An important feature of lupus that I have already inferred is the reversibility of the process, and to me it’s a potentially completely curable disease; because if you can stop the reaction – the ongoing reaction of the tissue hypersensitivity state – then the collagen reforms.

The heart muscle is frequently involved and it is and has been in the case of (name deleted) when she came back to the hospital this time. She really was in heart failure due to inflammation of the heart muscle. This is all completely cleared up, but she still has cardiovascular symptoms. Some of her trouble may well have been pericarditis commonly present. There is often a murmur due to valvulitis of the mitral valve. This was originally described as Libmann-Sachs non-bacterial endocarditis. Both Libman and Sachs described the condition before lupus was really well known as an entity. They thought they had another disease altogether, but it was found to be part of the lupus syndromy.

The lungs can be involved as they can in rheumatoid arthritis as well, with a patchy infiltration, and this is found to be due largely to capillary, small vessel involvement with the inflammatory lesions which eventually show up as a kind of a pneumonitis.

As indicated, every system in the body can be affected because the blood vessels are involved in every system. For example, even the nervous system with the connective tissue disturbance in nerve fibers leads to all kinds of bizarre nerve disorders such as peripheral neuropathies, motor aphasia sometimes tosis of an eye, double vision, and symptoms that would mimic many other diseases such as multiple sclerosis. Small bodies have been seen in the retina on occasion. These are known as cytoid bodies due to disturbance of the connective tissue there.

When the intestinal tract is affected, loss of appetite, nausea, vomiting and abdominal pain are very common. There may be peritoneal irritation, enteritis. The pancreas can be effected. Again, we’ve seen this in rheumatoid disease as well and sometimes paralytic ilias has been noted. Diarrhea is a very inflammatory reaction. Or both in rheumatoid arthritis and in lupus, the liver is very active in detoxifying the blood. After all, this violent generalized inflammatory state does induce the development of a great many foreign protein substances and toxins which have to be detoxified or gotten rid of and the liver is a great area for this. Naturally it’s overworked and it can be enlarged simply on this basis alone.

The lymphatic system can be effected with enlarged lymph nodes, palpable spleen. The enlarged spleen is noted in approximately l5% of all patients.

A Case History of The Benefits of Antibiotic Therapy

One of (patient’s name deleted) problems has been a change in her menstrual period. She went from February until June, and matter of fact just recently, without menstruating and then just menstruated very briefly for about a day or so. This is not uncommon at all in this condition. At times the reaction is just the opposite – too frequent menstrual periods.

In the past, the outlook in people with lupus was very grave, very serious; but we now have a number of patients actually with generalized systemic lupus whom we have followed for 10, 12 even l5 years and who are doing extremely well. I think the reason is that we have suppressed the microbial elements which contribute to the progression of the disease by our methods of treatment, particularly with the long-term use of antibiotics given in rather small doses or persistent doses at least. And apparently the antibiotics are completely harmless. We’ve yet to find anybody that’s been harmed by the medication.

Incidentally, chloroquine has been used for treating lupus as well as other antimalarials for a number of years, but chloroquine has been taken off the market because of its effect on the retina. It has caused considerable retinal damage in some patients. So if one does not treat the patient as we do with antibiotics along with steroids, and use steroids alone, I think that the prognosis is poor with steroids alone, but in our combined treatment it’s extremely good.

They have very severe exacerbations at times, which (name) has had. She was here recently, went home to Central America and then had to come right back. But she’s now calmed down and the whole condition is under very much better control and she’ll be leaving in a few days once again. One of the best signs of recovery is a rise in hemoglobin. And her hemoglobin has come up to 11 gms.

In conclusion, lupus is very much like the other connective tissue disorders, most particularly rheumatoid arthritis. It’s a very much more constitutional illness than rheumatoid arthritis, at least more serious in the sense of the severe involvement of certain organ systems, although rheumatoid arthritis does affect the identical systems, but not to the same extent perhaps.*  Just as in rheumatoid arthritis, it is a potentially reversible disease because it affects the collagen, which is capable of full recovery and regeneration. If collagen changes persist for a long time, then scar tissue moves in to take the place of the weakened connective tissue of the collagenous type, and the scar tissue then can be a menace. Scar tissue moves in more quickly in rheumatoid arthritis than in lupus. Our problem is one of etiology and that’s why we are engaged in our laboratory here in the Arthritis Institute at the NORH working hard on the factors that set the reaction off, that is the bacterial causative factors which then produce this autoimmune persistent type reaction.

*Rheumatoid arthritis seems to effect one system at a time; lupus on the other hand, can effect all systems at once.